Below is an excerpt from Volume 1,
beginning at page 302:

During the operation of the Bell or Oil Creek iron furnace, the only method of crossing the Allegheny was by means of a rough flatboat. Soon after the Drake well began producing, a rope ferry charter was secured by ex-Sheriff Thomas, of Franklin, which he sold shortly afterward to Henry Bastian, who built a boat large enough to carry a loaded wagon and team. He stretched one thousand feet of three-quarter-inch wire across the Allegheny, sixty feet above the water. This was well patronized, the receipts frequently running as high as forty dollars a day. Mr. William L. Lay purchased Bastian’s farm in 1863, including the ferry, which he enlarged, also improving its approaches. About the same time, Phillips and others conducted a ferry at the upper end of South Oil City. The Halyday boys had a ferry across Oil creek in the early days, and ran it till in the forties.

The first county bridge, a single-track wooden structure, at the foot of Center street, was built in the early fifties. It was carried away by the great flood of March 17, 1865, and was replaced by a single-span combination wrought iron arch and truss, 180 feet by 40, with double track and footway. This was opened to the public July 27, 1866. Its total cost was sixty-five thousand dollars. Toll was charged till 1870, when it was purchased by the county and made free. A few years later, this bridge was taken down and replaced by a lighter but stronger steel structure, because it was not thought safe under the strain of the large street cars, heavily loaded, which passed over it frequently on their way to and from Monarch Park and Franklin. The first railway bridge was built by the Atlantic & Great Western Railway Company at the mouth of Oil creek in 1866. The first locomotive to cross the creek was run upon a track supported by the ice, from the west to the east side, where it was used upon the Oil creek road. The Allegheny Valley railway bridge, built of wood, 1869, has since been replaced by an iron structure. The first W., N. Y. & P. bridge was built in 1870. It has been burned several times, the last time in 1892, when it was replaced by the iron structure still in use. The county bridge at the head of Seneca street was built of wood in 1877. and in 1883, was rebuilt of iron.

The Oil City Petroleum Bridge Company was incorporated May 16, 1864, when the following officers were elected: William L. Lay, president: S. Stevenson, secretary; A. S. Pool, treasurer. The capital stock was $100,000. The bridge was opened as a toll bridge in 1866. It was purchased by the county and replaced by the present fine three-span iron structure, in 1909-11.

The Venango Bridge Company, J. J. Van Dergrift, president; Fid Bishop, secretary; and John Mawhinney, treasurer, was organized in 1873. A suspension bridge was built in the Third ward crossing the river, and began taking tolls in 1876. The county purchased it in 1903-04. It is still in good condition.

The toll bridges built by the capital and enterprise of residents of the town so soon after Drake’s drill had put Oil City on the map, at a time when the county or the city was not ready for such an undertaking, certainly speak strongly for the business foresight of the gentlemen concerned in their erection, and of their faith in the city’s future.

The third highway bridge across the river was built in 1893 by Mr. J. B. Smithman, a resident of the city, principally for the use of the Oil City Street Railway Company, which he had chartered in 1889. It was named the Relief Bridge, and was a steel through truss structure, with two railway tracks on it and a covered sidewalk, and connected Main street and Central avenue. The tolls for crossing it were one third of previous rates, and Mr. Smithman announced that as soon as one half its cost were realized in any way it would be made a free bridge. On Aug. 29, 1900, he sold the bridge to the county at one half its cost to be made a free bridge. In 1902 the Suspension bridge was sold to the county, and in 1903 the Petroleum bridge was sold to the county—to be made free bridges.

In 1890 Mr. Smithman secured from the city councils an ordinance to operate a Street Railway in Oil City by electric power, which then was a new motive power and destined to revolutionize street railway construction. The railway and bridge were constructed during the depressed times of 1892 and 1893, caused by the disastrous fire in Oil City in June, 1892, and the great panic one year later. The first street cars were run from the east end of Main street, over the new bridge, up Central avenue and to the end of West First street, on Thanksgiving Day, Nov. 30, 1893. The electric motors were a pronounced success, and this, with the prospect of an end to bridge tolls in the near future, marked a new epoch in the history of Oil City. A feeling of permanency became evident. Property along West First street doubled in value in a year. Street railways were soon introduced in Warren, Franklin, Meadville, Titusville, and elsewhere, to be run by the new power. Under Mr. Smithman’s ownership and management the railway was extended up Cottage Hill on Spring, Graff, Harriot, Bissell, Hoffman and Smithman streets to Carroll avenue, near the Oil City hospital; up Seneca street; over East Second street to Sage Run, in the Sixth ward; and westward on West First street, and up Deep Hollow through charming forests, to Smithman Park, a resort founded by him on land purchased by him, midway between Oil City and Franklin. Nature seems to have formed this spot for rest and recreation. A hundred years ago hunters called this stream or run to the river “Seven Lick Run”—referring to the deer licks or places where deer sought the mineral waters and were shot by hunters from hidden huts in the bushes or trees. Springs are abundant, some of pure cool water, others mineral springs, differing in contents of magnesia, iron, carbonate of soda, chloride of sodium and potassium; shade and turf are abundant, and from the start the place was crowded and was a popular resort for picnics and assemblies that formerly had gone to distant places at large expense. In 1899 and 1900 he extended the road from the Park down Van Buren Run toward Franklin, to go over a bridge the erection of which he had commenced over the Allegheny river into Franklin at Third street to connect with the tracks of the Franklin street railway chartered in 1894, or to run on tracks to be laid on streets under an ordinance granted him by the Franklin city council in 1900.

In 1900 a second electric street railway company was organized in Oil City, called the Citizens Traction Company, of which D. J. Geary was president, William Hasson vice president and William Filson secretary. It laid tracks from the U. P. Church up Pearl avenue to the newly built Fair Grounds east of the city; and on South Seneca street over the Petroleum bridge, State street and West Third street to Mitchell avenue; and in the same year purchased the Franklin street railway ; erected a bridge from West End borough over the river to Reno, and laid tracks thence to Rocky Grove and Franklin; and being blocked in its efforts in the courts to compel the Oil City Street Railway Company to grant it the use of twenty-five hundred feet of the Smithman road to connect its own tracks on Pearl avenue to its tracks on South Seneca street, the new company on Jan. 14, 1901, purchased from Mr. Smithman all his street railway holdings, which included all the stock of the Oil City Street Railway Company; the Oil City Station Railway Company, which was chartered to construct the road from Oil City to Franklin via Smithman Park, and his street railway franchises in Franklin; and also bought the Big Rock bridge, and consolidated the two systems, making a trolley route from Franklin via Smithman Park to Oil City, which has been and is an important factor in the development of the two cities. The new company also bought the surface of sixty acres of the Park lands, including the springs, large auditorium, restaurant, pavilions, and other amusement features, with certain reservations, and changed the name to Monarch Park. It also extended the railway to Rouseville, and to Siverlyville. In 1910 practically all the stock of the new company passed into new hands. Mr. Joseph Seep was made president; the power plant was enlarged, furnishing electric current for motors industrially; the railway route from Reno to Rocky Grove was abandoned. The properties are now owned and operated by the Municipal Service Company of New York. 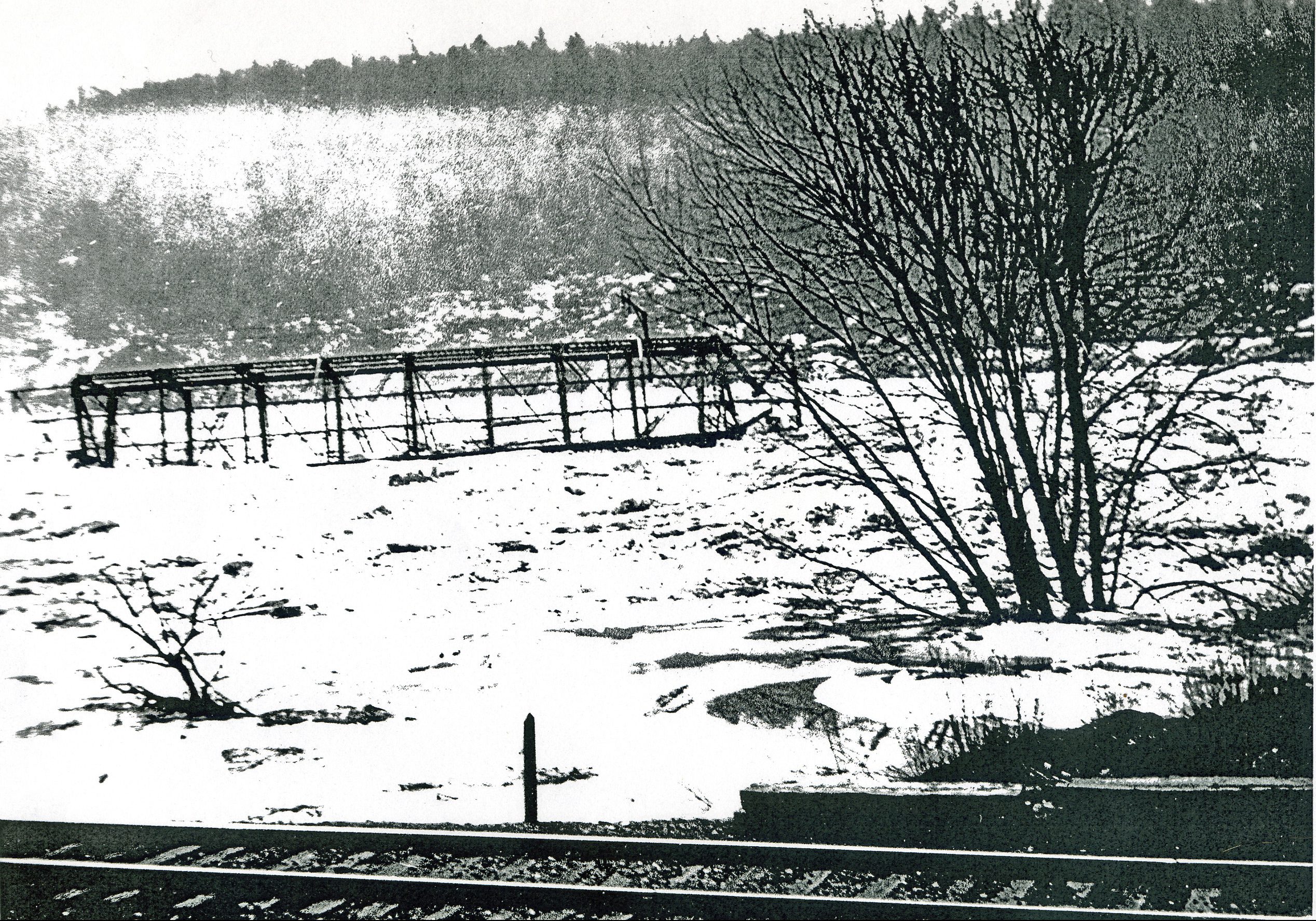 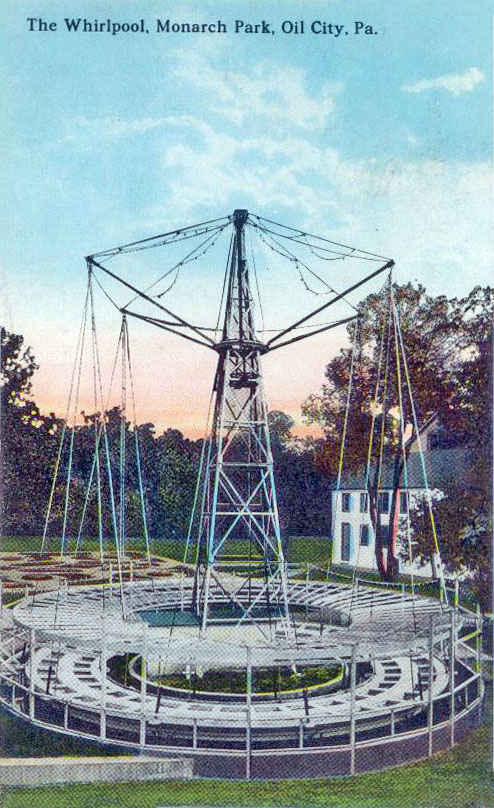 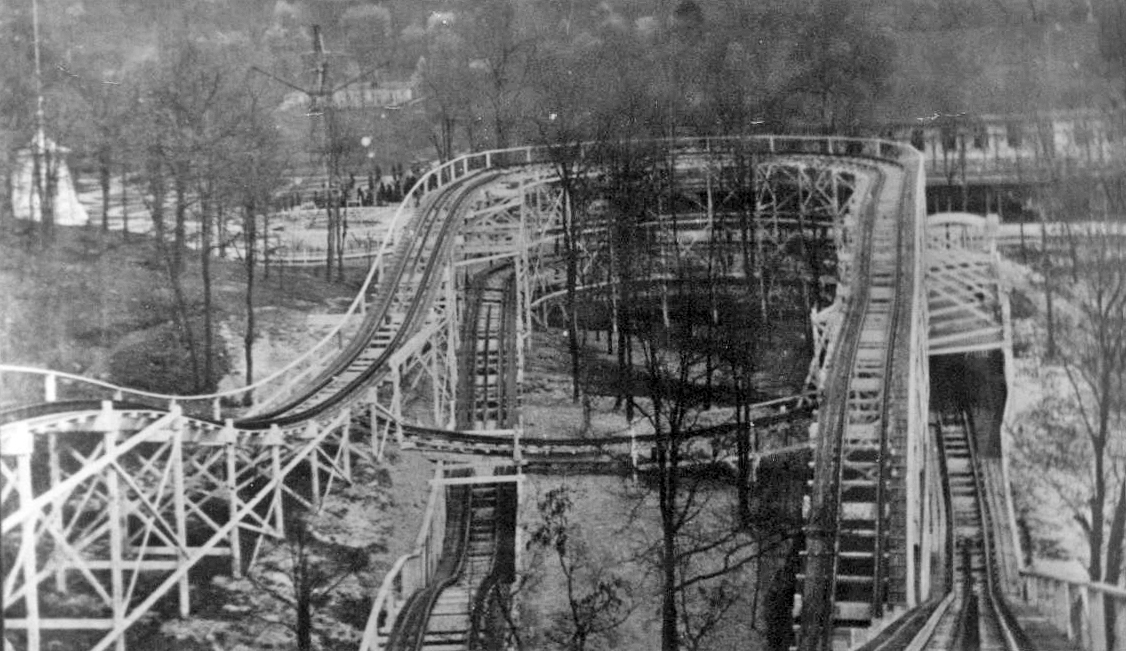 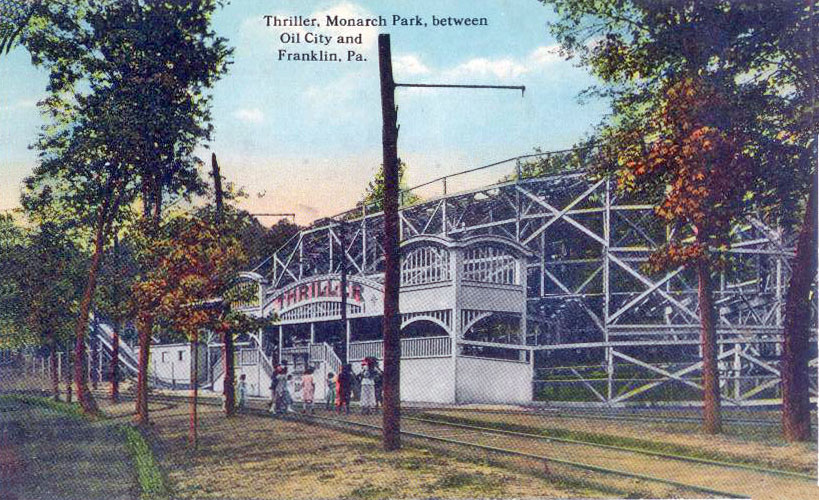 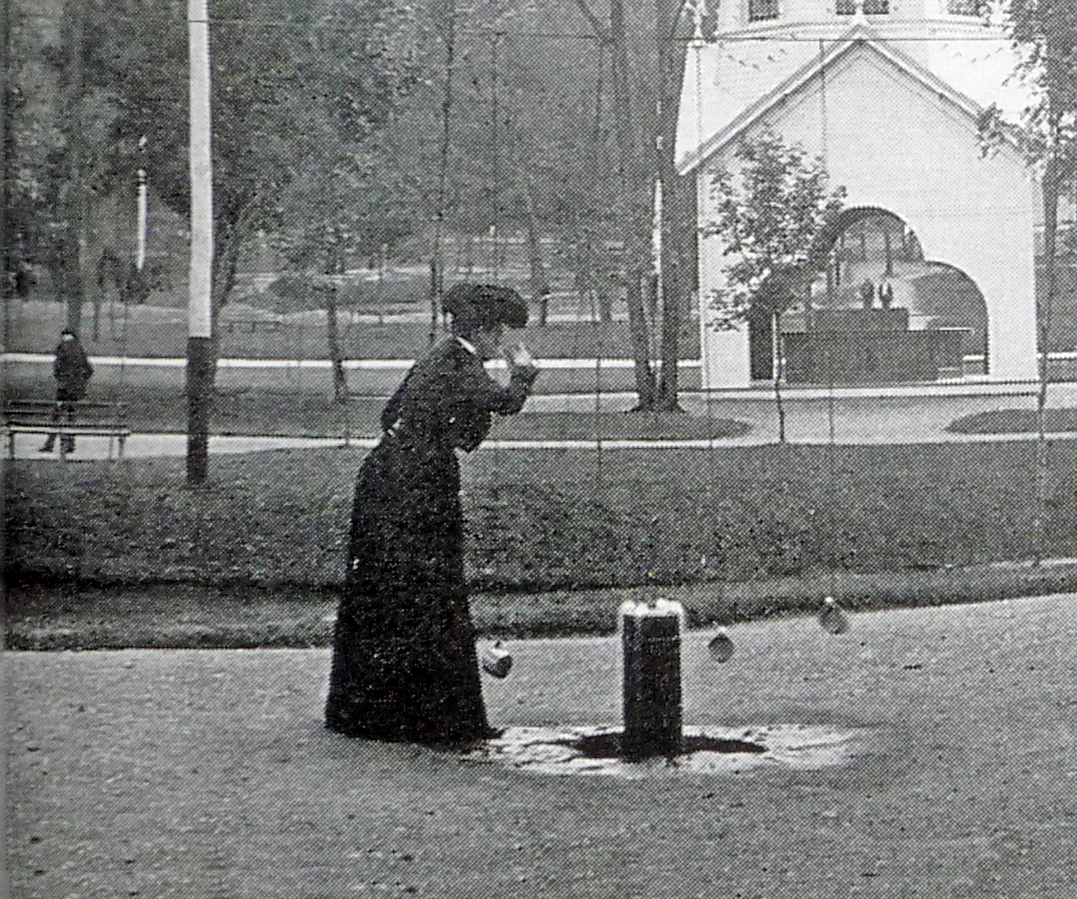 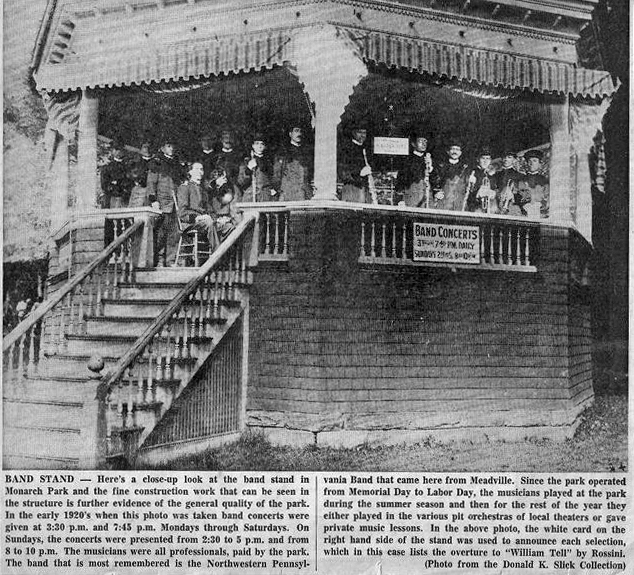 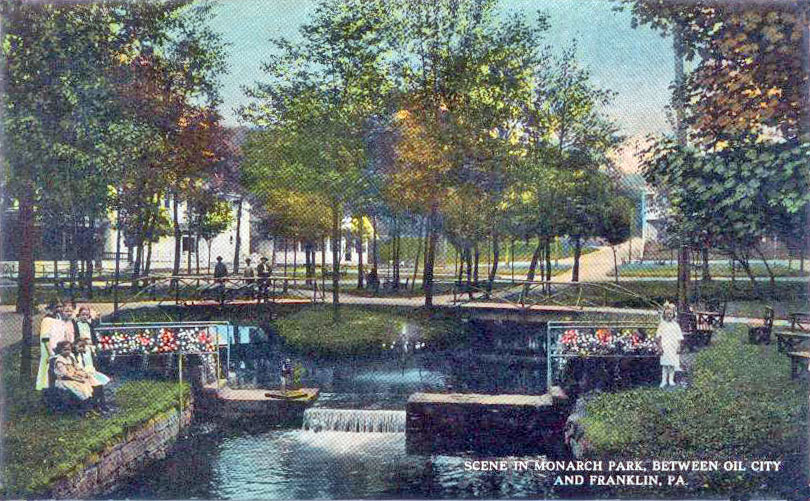 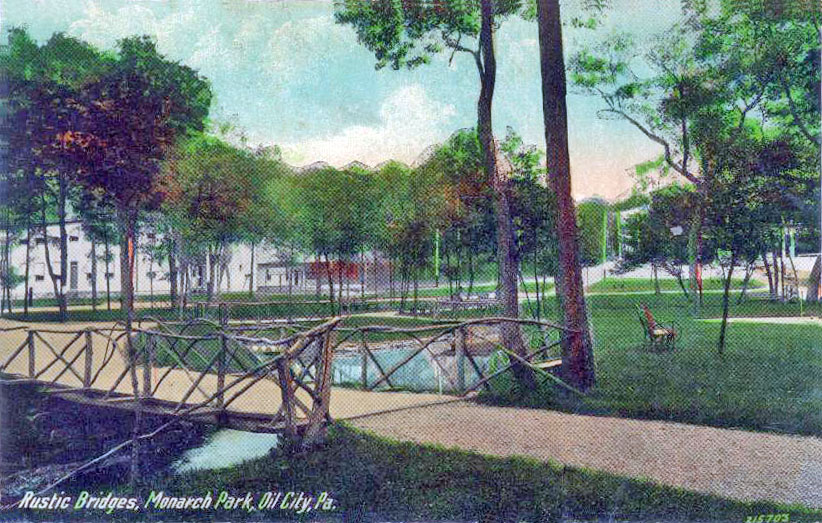 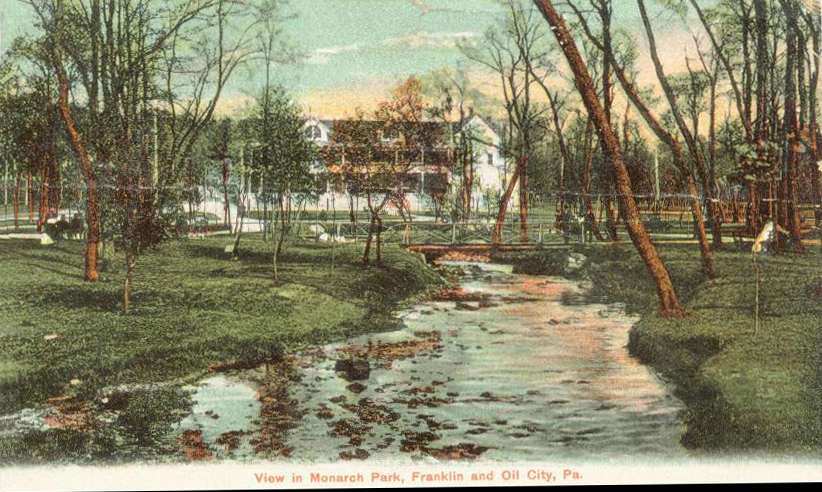 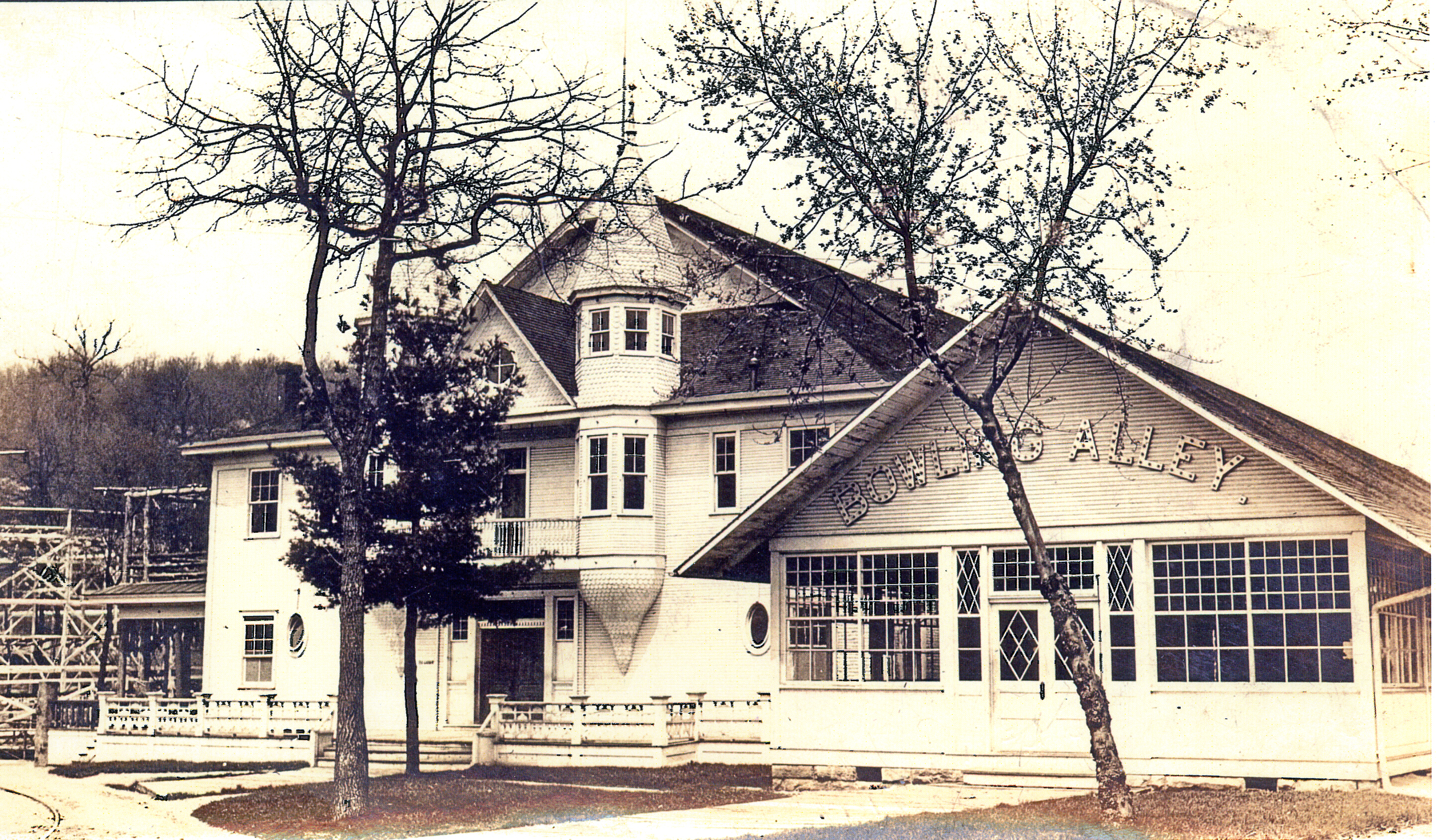 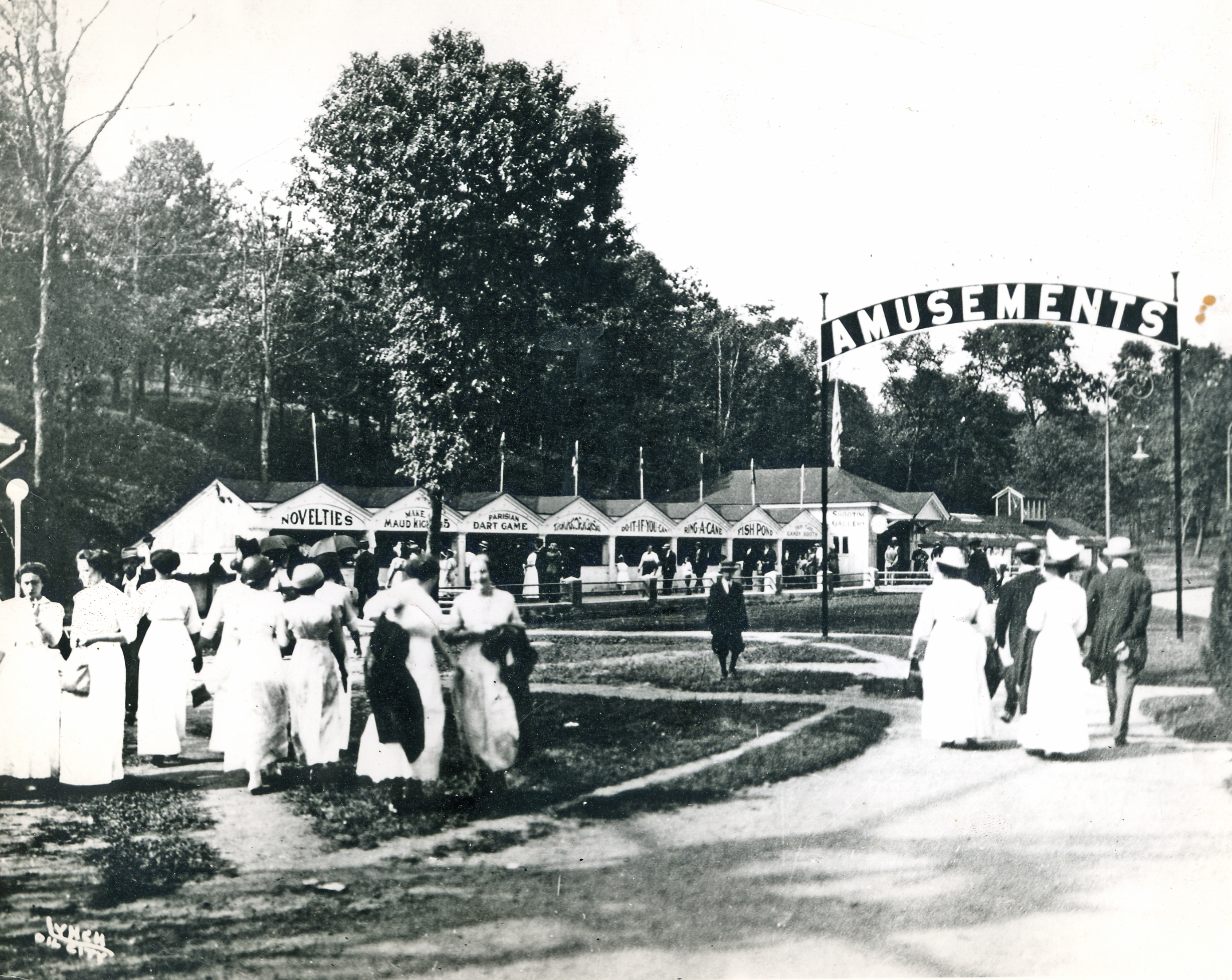 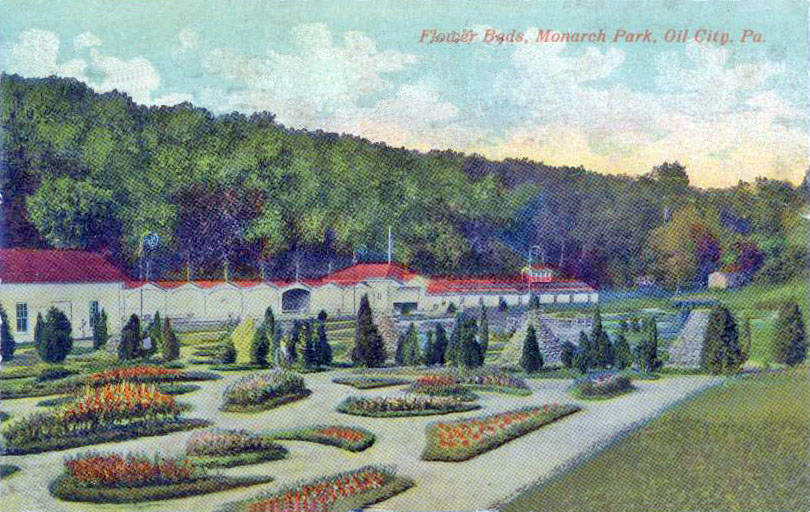 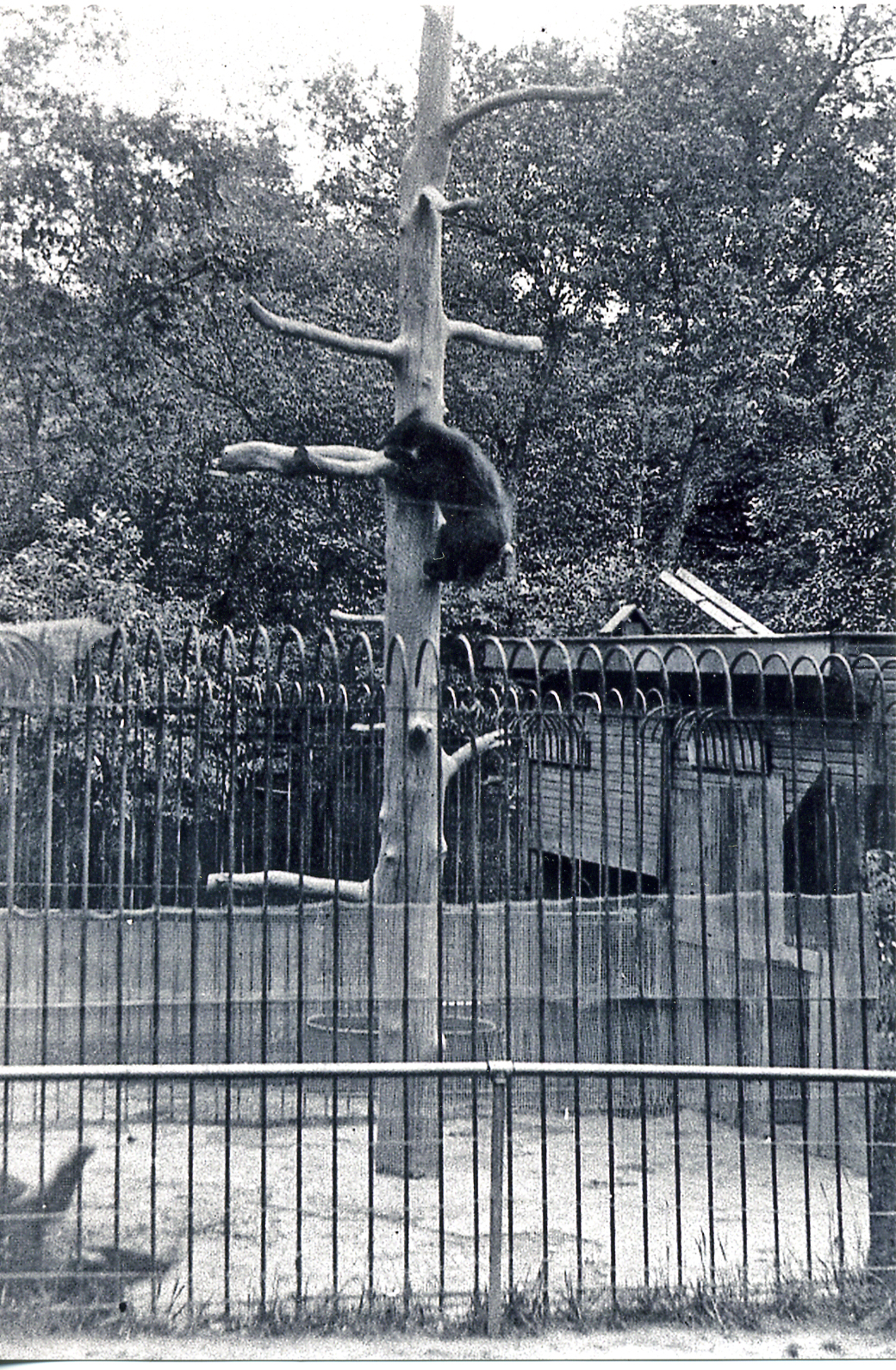 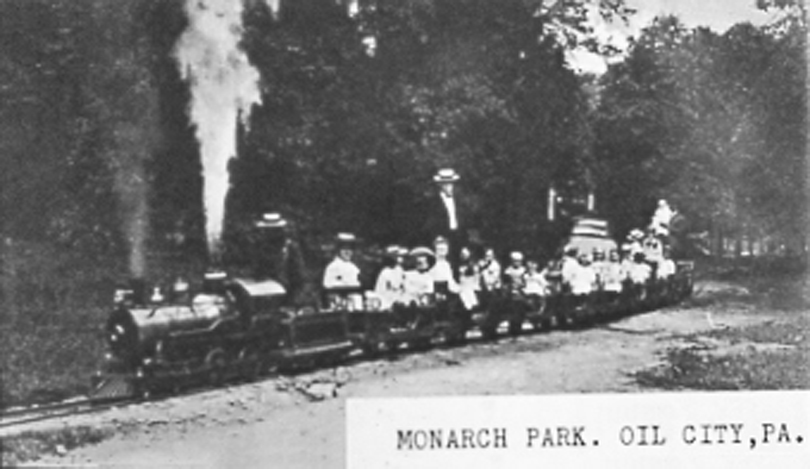 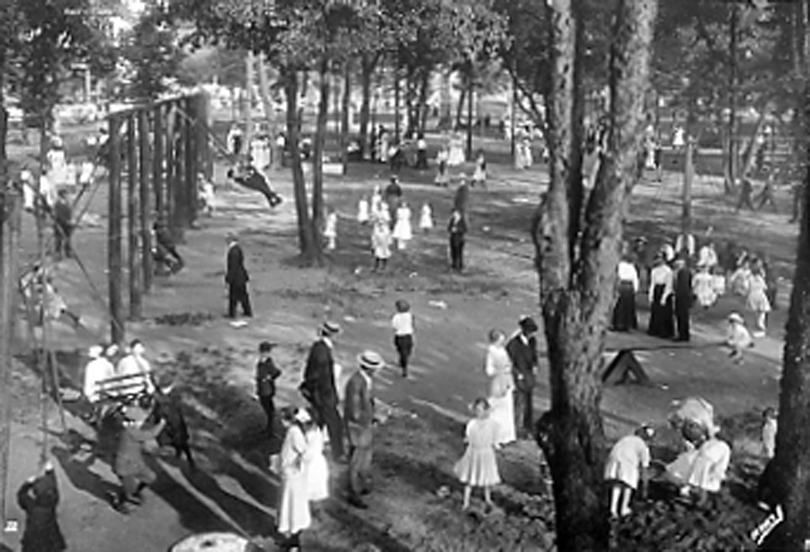 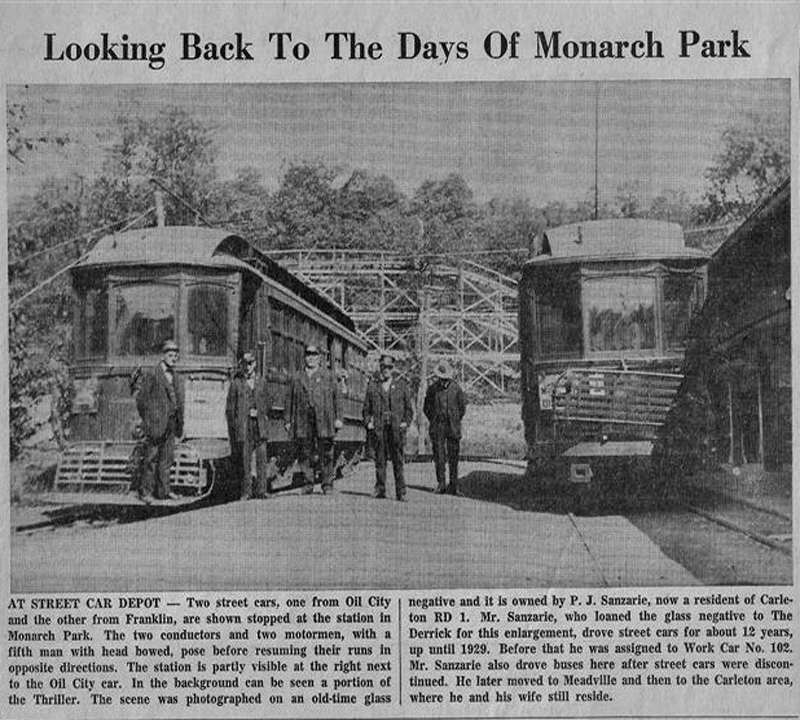 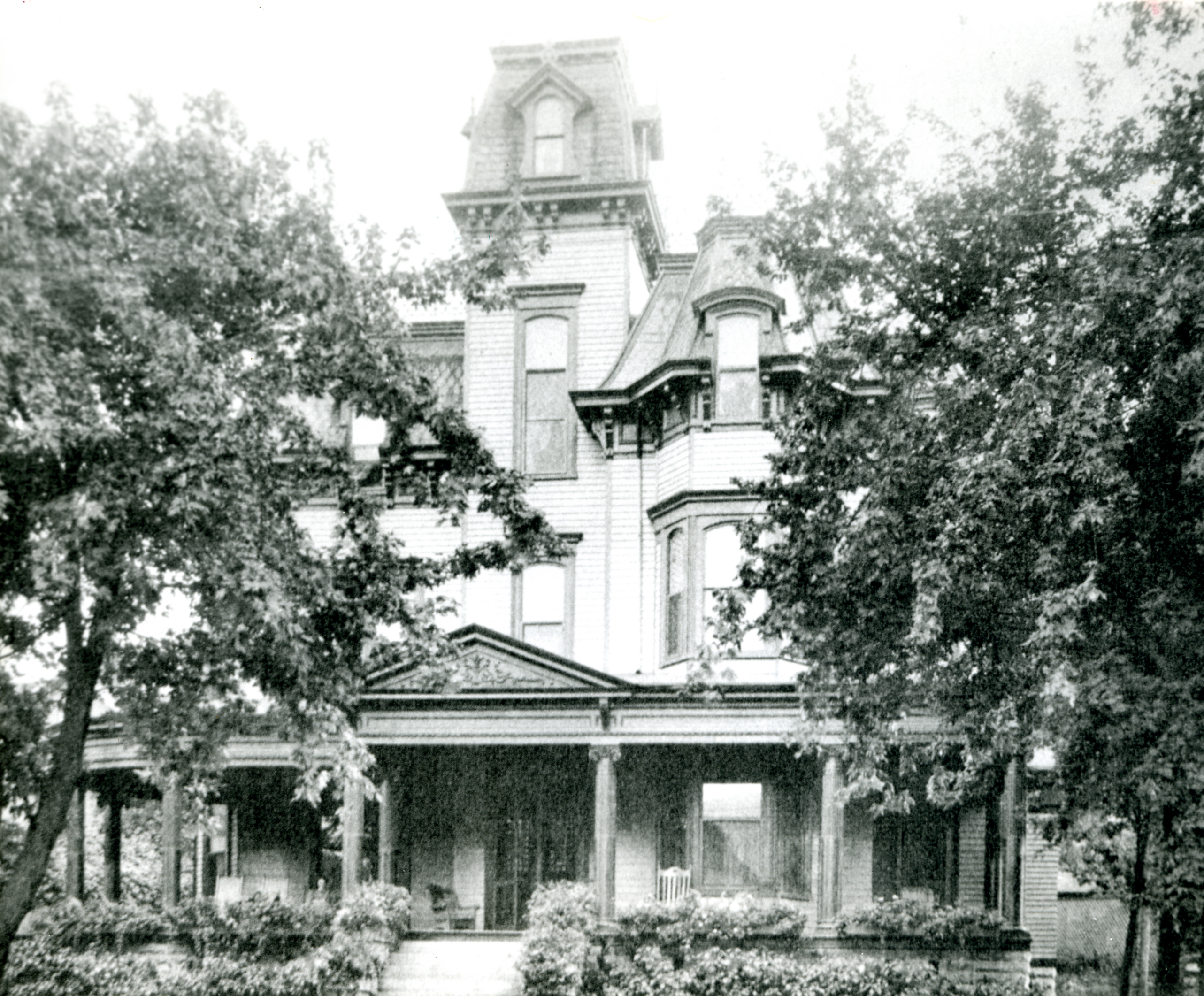 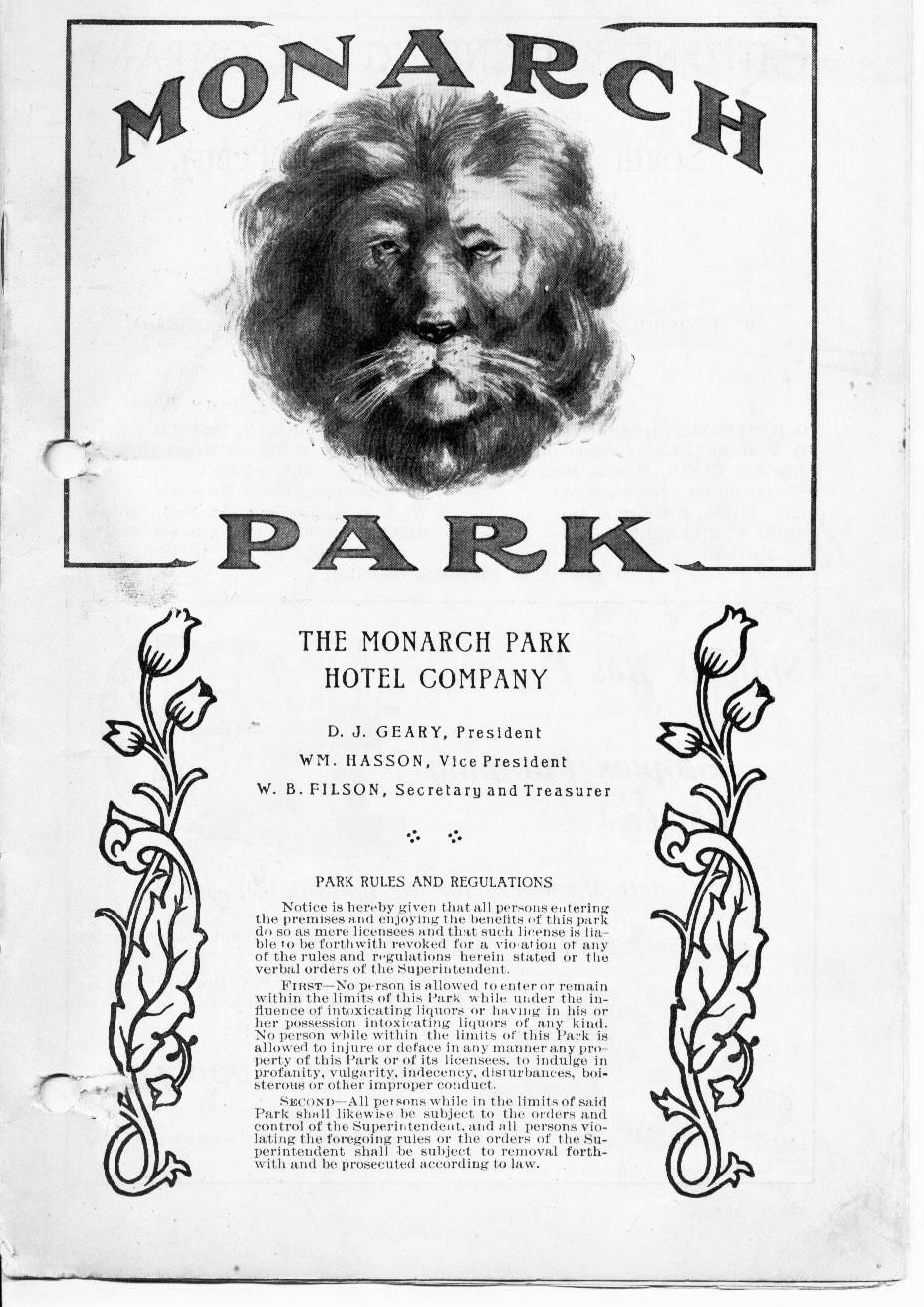 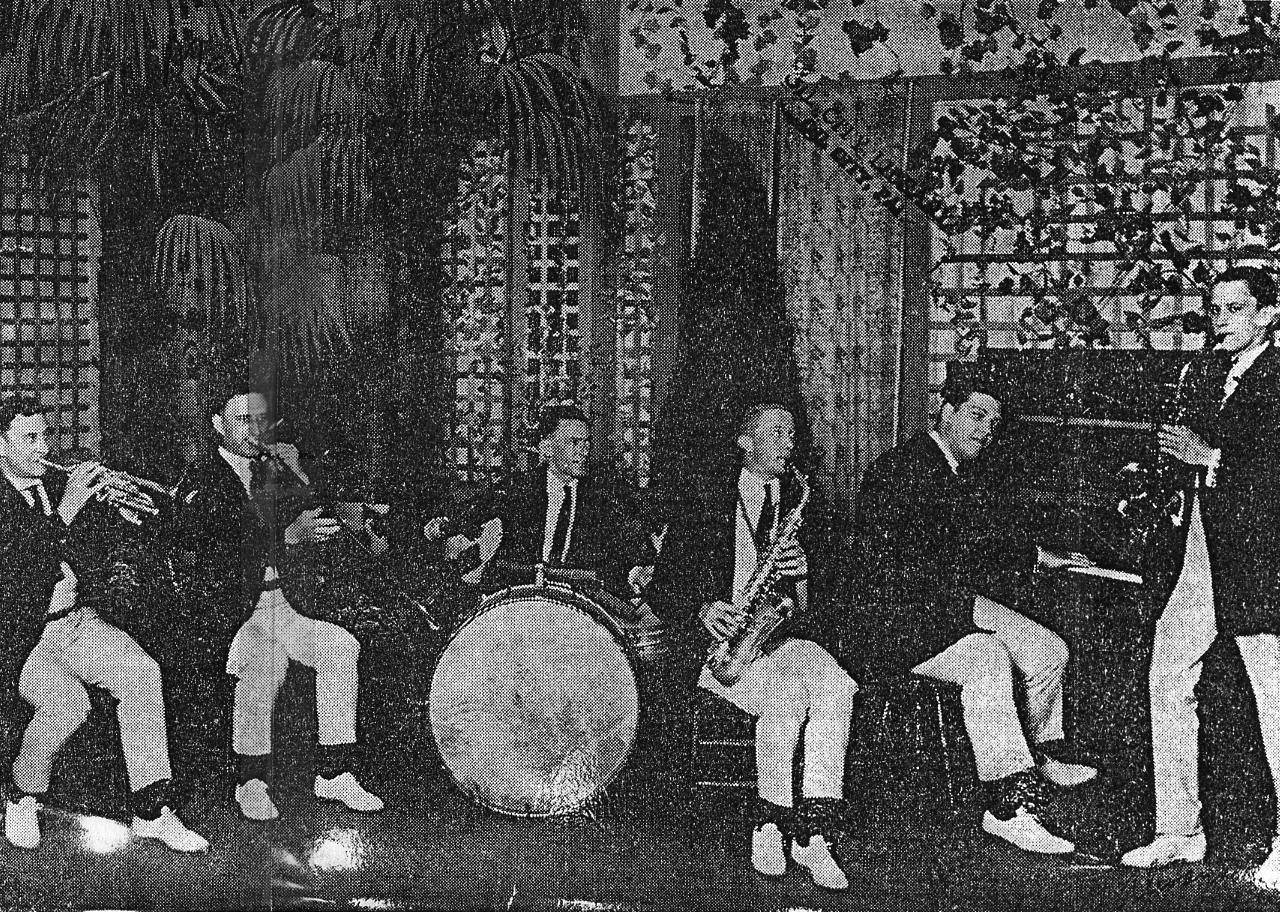